This week, we’re spotlighting a crucial and often overlooked aspect of the soccer industry that plays a central role in player safety: The Third Team – referees. Read about the culture of refereeing that Christina Unkel, a FIFA referee and a football laws analyst, is creating in order to prioritize safety for The Third Team and the players they officiate. This is how referees reclaim the game!

Christina told the WIS squad what reclaiming the soccer world would look like from her perspective as an officiator: “As we seek to #ReclaimTheGame, it is critical we define our values and our WHY behind our passion for the game. Soccer for me as a young, first-generation Hispanic girl was always an ultimate equalizer. This transitioned into my capacity as a soccer official who reached the highest certification in the world. However, it is well known that a toxic culture exists in the referee ecosystem but is never discussed, addressed or attempted to be eliminated due to fear of retribution, retaliation, or loss of assignments.”

Research suggests that more than 90% of grassroots referees have experienced abuse and harassment amid a culture of under-reporting.

As a result, the last few years have seen a crisis of referee shortages from the youth to pro levels as members of The Third Team are unwilling to work in an industry that does not prioritize their wellbeing. 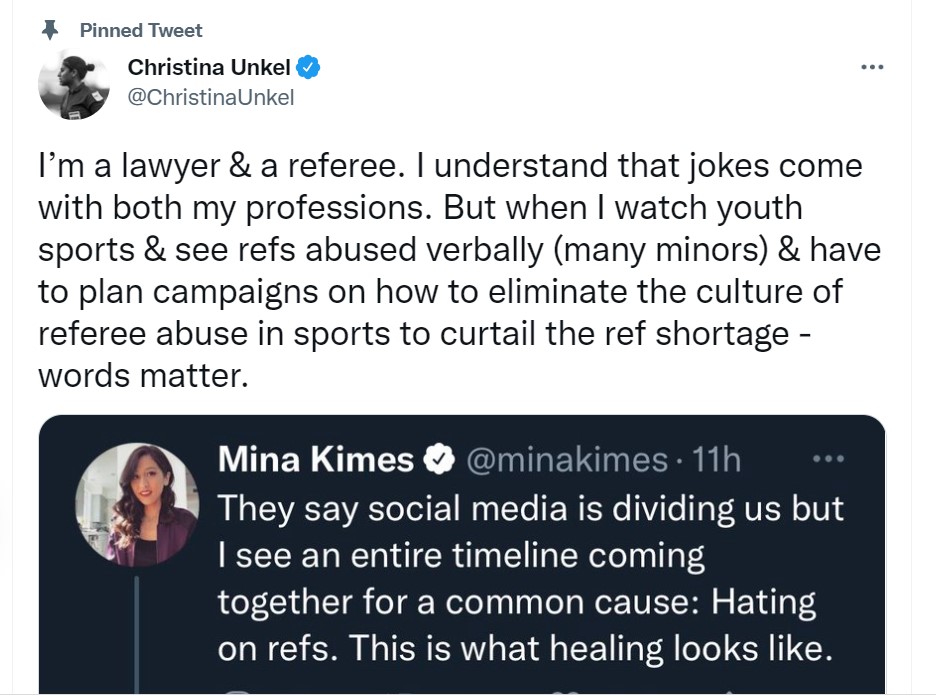 Christina Unkel is taking an action-based approach to tackling the issues of abuse affecting referees. She is the newly appointed State Referee Administrator (SRA), who is responsible for the certification and oversight of over 3,000 referees, instructors, administrators, and assessors in Florida. Christina stated: “I’ve added to these general responsibilities the PRIORITY to define my organization’s mission and values to ensure those in the Florida Soccer Referee Program’s ecosystem make decisions and interact with others showing RESPECT and leading their decisions to encompass RESPECT.”

When we asked Christina what tackling issues of abuse in the referee world looked like she explained: “The RESPECT campaign I am preparing to launch will not only address what is commonly known as the ongoing crisis of abuse (both verbally and physically) against referees by fans, spectators, parents, coaches, administrators and media with other organizations and leagues/clubs in Florida and around the world, but, most importantly, the RESPECT campaign will go to the heart of our referee ecosystem to ensure those who officiate and support officials do so in a healthy, supportive environment so they can deliver and perform on the field as #TheThirdTeam for the safety, health and benefit of the players, coaches, and fans–our overall soccer community.”

Join Christina’s movement by applying to work for the Florida Soccer Referee Program. They are looking for a new communications coordinator. Send your resume to SRA@FLSRC.ORG to get after it!

WHAT STORIES NEED TO BE HEARD?

Reading and sharing stories from the perspectives of referees ensures that their voice is heard and that there is more pressure on institutions to prioritize addressing referee abuse as well as inclusive industry standards.

Check out how referee Natalie Simon has made history by becoming the first Black woman to earn a FIFA badge (the highest ranking a referee can get) despite a referee culture that Simon said made her spend, “most of my career questioning if I was good enough. I think a lot of Black people, especially Black women, can relate to that.” Of Natalie Simon’s industry-first, Christina said, “Seeing is believing and once people see that, people will then realize it was missing in the first place. Then there will be little girls or others to follow.”

You can also dive into Christina’s article for The Athletic detailing how newly-revised soccer laws will impact MLS, NWSL and USL games. The laws implemented in 2021 included rules like concussion substitutes, which will allow refs to continue to prioritize player safety while keeping the “spirit of the game” alive.

Following and sharing content from people like Christina Unkel and Natalie Simon and accounts like @PROreferees, @FA_PGMOL, @MLSRefStats, @Officials101T, @TheRefCoach will help spread our consideration of The Third Team to the wider soccer community.

HOW DO WE KEEP PROGRESSING?

As soccer fans, players, and industry workers, we must continue to push for a soccer culture that safeguards referees. Managers and club officials must challenge abusive behaviour displayed by their own staff, parents and fans. It is also essential that players are taught to safeguard referees as if it were part of their training process. Playing soccer with respect is playing the game well.

What can you do?

Without referees, there is no game. The entire soccer community must lead with RESPECT inside and outside the referee ecosystem to end the officials’ shortage crisis and promote safety for everyone on the pitch.